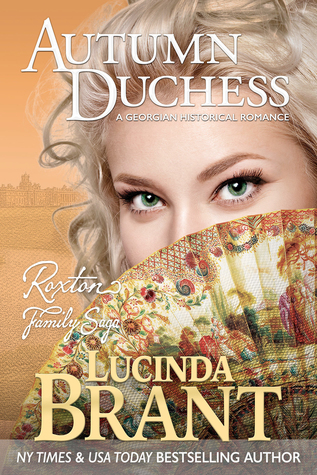 The cover no doubt is beautiful

You may remember that I was in awe of the book Midnight Marriage by Lucinda Brant. This one, Autumn Duchess, is next in line in the series.

I was not at all excited for this one because I loved the story of Julian’s parents which was the book before Midnight Marriage.

This is not a spoiler and can be read from the synopsis but this one is about Julian’s mother finding love again.

Now, don’t get me wrong. I have nothing against people finding love again but Antonia and Renard (Julian’s parents) did not have a run of the mill romance. It was something like a fairytale. Honest to goodness fairytale and this book ruined it. Completely!

Fair warning here, this review has many spoilers as I am mighty pissed because even with my reluctance to read this book, I was not hoping this mucked up a story.

I understand the change in Antonia as she had lost the major reason for living but the author ruined the other characters for me.

Julian, who was contrite about his actions and wanted to do everything to make amends and never hurt his parents again, has suddenly become an a-hole? Yes.

He may have technically been a virgin when he came to his marriage bed in the last book, the man never came across as prude. There is a difference between keeping the intimacies between two and being a prude, for crying out loud!

Deborah, who was a sweet dear, suddenly feels the need to challenge her mother in law’s authority? Why? What had poor Antonia ever done to her or anyone to deserve that kind of behaviour?

The physician bit? I get that Julian wanted what was best for her but dude had to be told that he basically put his mother up on a platter to be sexually abused by a sadist. Jonathan and Deb decided not to tell Julian of it and that does not sit well with me. He needed to be told. He should have been made to suffer!

The audacity of the man to not even ask his mother for forgiveness when he found out about the wrong he had unintentionally done her!

That scene in the library? I would have slapped Julian if I was there! Not once but twice this man did all in his power to bring his mother to her deathbed and neither times an apology is to be seen!

Jonathan’s character, in my estimation was hugely lacking. Though I am not against finding love more than once in life, I fail to see what Antonia saw in this guy. Yes, he is a good guy and all but you don’t fall in love with every good person you come into contact with. And, no I do not have a problem with the age difference or the fact that Antonia is the older one in the couple.

It had been mentioned that Jonathan’s first wife was his one true love and like Anotinia he too had fallen in love again, but do we get a glimpse into the life of his dead wife? No.

While Jonathan shares Anotnia with her one true love, her Renard, she doesn’t share Jonathan with anyone. There are three in bed at any time and not four.

How this love is a diluted version of what Anotnia and Renard is made so stark in the fact that she writes (in the letter collection book) that she will be the Duchess on Kinross until she dies and is reunited with her Monseigneur.